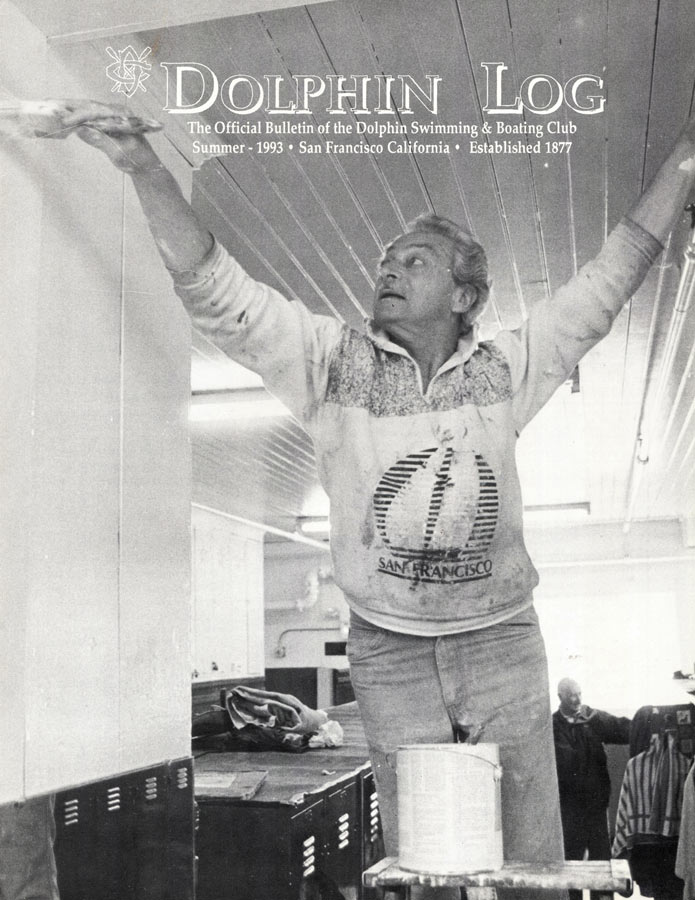 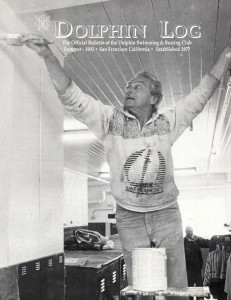 I was Boat/House Captain when the floors were last refinished. That was concurrent with the time when Mr. “Moon” Pasanissi was painting all the blue trim all around the club. He even got on the cover of the Dolphin Log. Incidentally, just before he got down and passed away, we formed a choral group to perform before the Old Timers’ Appreciation & Crab Dinner with a tribute to Mr. Moon, singing the song “Blue Moon.”

As I said, Moon was in the process of painting the blue trim in little batches at a time – until he eventually got the whole club’s trim painted blue. We were refinishing the floors with the first part of the process just finished – sanding the old varnish down to fresh wood surface. Moon typically did his mixing of the blue paint on the balcony, outside the Staib Room. He mixed and carried it faithfully and carefully of course! Well… as Murphy’s Law would apply, just after the floors were sanded and beautifully exposed, here comes Moon with a freshly mixed bowl of blue paint. You guessed correctly! He tripped and down went the blue paint on that floor! I happened to be there just after it happened.

We all liberally consoled Mr. Moon. The contractor was the best at consolation with assurances that it will come off and look like nothing happened before it got dry. I later saw the freshly wiped floor and was with the contractor as we (mostly me) were genuinely relaxed, even chuckling. It was then that we noticed that a small crack/gap between the flooring boards still had a smidegeon of blue paint. He was getting ready to dig it out to “finish” the job. Suddenly, I found myself asking him to not remove it. He asked why and was satisfied that since this spot was very, very small, it would be a keepsake. The contractor kept to his promise and the Blue Moon Spot is still there! It is a memory, the kind with a touch of humor to go with the honor.

I use a couple of landmarks to find it from time to time as it is not very easy. I will certainly take photos of it in memory of this very special man whom we all, including our Grandson Matthew loved dearly, while fishing, boxing and playing cards.

You and anyone else are welcome to meet me sometime in the very near future and I will show it to you before it probably gets sanded.