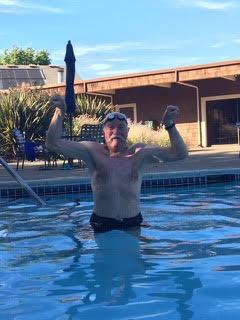 Due to conditions beyond anyone’s control, Dolphin Club group swims have not been swum this year.  However, some members wanted to commemorate our older swimmers by doing some form of the yearly Walt Schneebeli Over 60 swim, so the instructions were:

‘Homage to Walt and Charlie and all… over60 swim, wherever you swim, post your Saturday swim photos,?routes, whatever!’

So, fifty-one over 60 swimmers swam a self-directed, socially distanced swim wherever they could, many photos posted, no times listed, just swim.  Many swam in and around Aquatic Cove, and some swam elsewhere.

Helpers are the list of people who participated in the email thread that set up the swim and that has the pictures posted.

“Plus a dozen unsigned!”

Congratulations to all who participated