All the things that happened in handball

Although many club members rarely visit the Dolphin handball court nowadays, handball has a thriving history at the Dolphin Club. In 1958, one in five members was a handball player, and Dolphin handball happenings have been reported in the San Francisco Chronicle since March1912. And, yes, baseball great Joe DiMaggio’s older brother, Tom, was an avid Dolphin handball player. Dolphin members will surely recognize the name of a competitor in that same tournament: Sal Sancimino – the man whose name graces the Dolphin turret lounge and whose historic Swan’s Oyster Depot has earned acclaim from locals and celebrities including Bing Crosby and Anthony Bourdain. 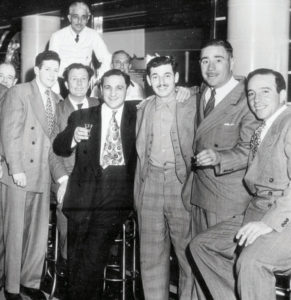 Handball is as San Francisco as the Gold Rush, with the first “handball alley” established in 1851 at the Shamrock Saloon and Ball Alley at 543 Market Street. As handball’s popularity grew, more courts popped up South of Market on Howard Street in the 1880’s and 1890’s including the San Francisco Handball and Racquet Club, Butler’s Court, the Union-Court, and others.  An 1891 St. Patrick’s Day match lured contestants with a $40 purse – that’s about $1,131 in 2019 dollars. A frequent player in these matches was Dolphin legend James J. Cronin who joined in 1891 and played handball on a makeshift court in the locker room. He went on to hold almost every club role including President during the 1906 Great Earthquake and Fire.

Although handball courts fell to the 1906 flames along with much of the city, the sport bounced back with Dolphin handball riding the updraft. In May 1910, a motion was carried that “a committee be appointed to look into the advisability of having a handball court” with a follow-up motion in 1911 to move ahead with building the court. After a second handball court was Built in 1923, the Dolphin Club became even more involved in the Bay Area’s handball community. In 1929, member Joe Bertrand represented the Dolphin Club at the formation of the Northern California’s Handball League including the Athens Athletic Club, San Francisco Young Men’s Institute, the Olympic Club, South End, Elks club of San Francisco, University of California, San Francisco Y.M.C.A., and the Athens Athletic Club of Oakland.

The Dolphin Club also has a history of co-hosted tournaments with the South End Rowing Club (SERC) such as the Pacific Coast Handball Singles Championship (1928) and the SF Police and Firemen Handball Tournament (1930).  In 1952, handball was of such general public interest that five Dolphin handball singles champs were interviewed on San Francisco’s KYA Radio by sports director Les Keiter.

Meanwhile, handball’s growing popularity reached another SF landmark. While Dolphins rowed around Alcatraz, Al Capone strummed his banjo in the “The Rock Islanders” prison band and partook in other recreational activities. In a 1938 letter to his son Capone wrote, “Now Son about me, please do not worry, as when you see me again, you sure will be surprised, in fact Junior, I am 7 1/2 pounds under 200, Ha Ha, and in good shape. My routine here is Morning Yard, I mean the amusement Yard, Baseball, Horseshoe Courts, and Hand-ball courts.”

Prison is a natural fit for handball with minimal equipment needs and, well, a lot of walls. Notes by Alcatraz supervisory staff in 1949 also give insight into handball’s popularity by mentioning that inmates were allowed to purchase “one dozen handballs, one ream legal paper, one fountain pen, one ruled tablet, one handball glove, and ink for the fountain pen.” Even Alcatraz child-resident Jolene Babyak (who lived on Alcatraz as the daughter of the acting warden) knew that a handball was “the most valuable item on Alcatraz.”

At its simplest, handball only requires a ball and a single wall — although modern handballers usually wear handball gloves and goggles for protection. One player uses their hand to hit the ball against the front wall, and their opponent tries to do the same before the ball can bounce on the floor twice. Handball courts can have 1, 3, or 4 walls and can be played with a variety of ball sizes, weights, and bounce. Handball matches can be singles or doubles.

Handball players should be able to hit the ball with their right and left hand with equal skill. This is an intriguing change from racquet sports in which players typically hold the racquet solely in their dominant hand.  This ambidextrous approach fits in perfect harmony with other Dolphin sports including swimming, rowing, and weight training.

“It’s fun!” enthuses Dolphin president Diane Walton. Dolphin Mee Lee is quick to agree. Mee started playing handball in April 2018 and has  already played in novice tournaments. “It’s a fun way to work out and play a sport with so much history.” 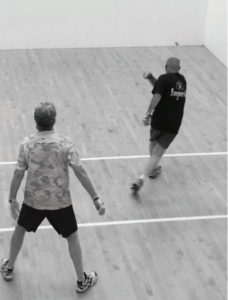 Even long-time players still relish a challenging handball match. Dolphin Dick Keltner started playing at the fire department in 1969, played after he joined the Dolphin Club in 1984, and still loves it. Happy 50th Handball Anniversary, Dick! Handball Commissioner Paul Brady started playing handball in the army and continued after joining the Club in 1990. Paul, Dick and a small cohort of handball enthusiasts play every Thursday at the Club. In addition to being fun, Dick and Paul emphasize that it is a good workout! This sentiment is echoed by Jonathan Epstein, whose 2005 “Not So Courtly” Dolphin Log article postulates that handball is “the perfect combination of great aerobic exercise, competition and, most of all – fun. There really is no better full-body workout.”

Winner of 24 national handball titles, Tracy Davis (a SERC member) keeps herself in top condition for strenuous play on the pro circuit, but says it’s not only about physical fitness. “It’s a workout for the brain and body at the same time.” While the ball is ricocheting off walls at high speeds, you have to focus on your strategy in coordination with muscle memory in order to get the next point. You also have to analyze where the ball is going to be, anticipate what shot your opponent is going to make next, and decide which is the best shot to make to force your opponent out of position. “As long as I’ve been playing, I’m still fascinated by it!”

Handball is also an excellent outlet for stress and frustration. In a 1928 article on men’s heath, San Francisco Chronicle writer Al Williams recommends handball for the extreme “grouch” because it “has the advantage of giving you an opportunity to work off your temper on something that won’t mind very much.” He concludes by saying “Every steam engine has its safety valve.” 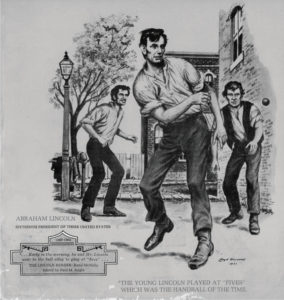 Even Abraham Lincoln played handball (his contemporaries called it “fives”) for stress relief.A local court clerk wrote that Mr. Lincoln could be found at the local handball alley “vigorously engaged in the sport as though life depended upon it.” Instead of attending his party’s 1860 national convention in Chicago, Lincoln stayed in Springfield and played handball while waiting to hear if his bid for the presidential nomination was a success. Lincoln’s handball is now on display in the Smithsonian.

One hundred years later, this perfect storm of fun, ambidextrous virtuosity, physical conditioning, fast reflexes, mental focus, and stress relief may be the reason why handball was part of the astronauts’ training regime in the 1960s.In his study of the astronauts, writer Norman Mailer included a speculation on the popularity of handball among astronauts:  “coordination between hand and eye was crucial, the cool nerve of the hunter was crucial, and the competition among all those keyed up egos competing with their quick reflexes for the same few limited Apollo seats – well, handball was no surprise.” 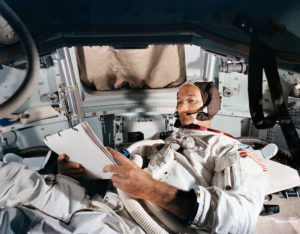 As Alan Shepard entered the Freedom 7 rocket to attempt the first American flight into outer space, he found a sign taped in the cramped cockpit: “No Handball Playing Here.” In response to the Apollo 11 moon landing, the Irish Press quipped, “When the Americans decide to introduce sport to the moon, there is no reason to believe that it will not be handball.” 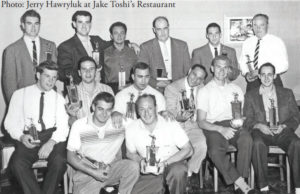 While astronauts dreamed of playing handball on the moon, that same decade saw the heyday for Dolphin handball. Starting in 1961, the Dolphin held an annual Handball Awards Dinner Dance tradition, which peaked in May 1966 with a turnout of 136 guests for a sit down prime rib dinner and dancing to a live band until 1 am. Ticket price: $4.00.

The sport has seen a slow decline across the nation since the 70s, and only a few Dolphins now play regularly. But now while the club turns its lonely eyes to handball, the sport hasn’t left and gone away. The handball programs at the South End Rowing Club and the Olympic Club are vibrant and thriving. 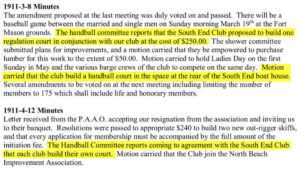 1929 – Joe Bertrand represents the DC at the formation of the Northern California Handball League.

1955 – April membership drive specifies, “You know the kind of members we want – the same high caliber that were brought in last year – men who are interested in aquatics, handball, and good fellowship.” 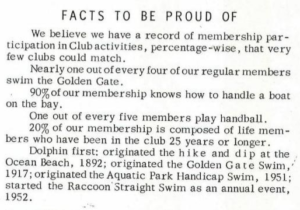 1958 – “Handball will be King for the next four months at the Dolphin Club.” In the 1958 singles tournament, there were four classes: first, second, third, and novice.

1958 – “Nearly one out of every four of our regular members swim the Golden Gate. 90% of our membership knows how to handle a boat on the bay. One out of every five members play handball.”

1960 – Handball Commissioner Ray Beliuomini promotes “quickie” tournaments to “keep the members in practice and stimulate interest among the novices.”

1966 – At the annual Handball Awards Dinner Dance, 136 Dolphins and guests feasted on Prime Rib and danced to a live band until 1 am.

1982 – Threat of converting the handball court to racquetball brings out a storm of protest. 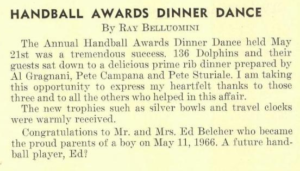 1995 – The handball court’s hardwood floor is sanded and refinished by Paramount after it is used to film “Jade” by Oscar winning director, William Friedkin.

2005  – Jonathan Epstein writes “Not So Courtly” with pointers on getting started (“wear padded gloves”) as well as extolling the many benefits of this full-body workout.